You and your entire family are in our thoughts and prayers.

Your father was such a noble champion for those most in need.

In a world that is increasingly polarized my heart strings are pulled by the memory of Sarge who was so universally admired -- and justly so!

The world is better because of the Peace Corps, for the Office of Equal Opportunity, for Headstart in particular, and for the War on Poverty in general.

For 19 years I was proud and grateful to be one of the countless soldiers marching in your father's Headstart Army. I began my Headstart service in the ghettos of D.C. and finished when marriage took me from Texas to Toronto.

One of the treasured evenings of my life was to return to D.C. to participate with your father in the 25th Anniversary of Headstart.

I well remember when your Daddy rose to speak jumping to my feet along with hundreds of teachers, volunteers, and graduates of Headstart to wildly applaud our hero.

Your father's selfless service and magnetic energy helped all of us to see that the real joy in life was in the giving not the getting. What a lasting gift he gave us all.

As Lyndon and Lady Bird Johnson's daughter, I will always be grateful for Sarge's service to my father. He could have so easily said I've done my part after President Kennedy's assassination. But your Daddy's devotion to country was bigger than service to one president -- even when that President was his own family.

His service was for the world family and his imprint lives on in thousands of lives that were transformed for good because of Sargent Shriver.

Tomorrow I will be in D.C. at the rotunda celebrating the 50th anniversary of your Uncle's inauguration. I do not know if I will have the privilege of seeing any of your family and sincerely respect why that may not happen now.

But as I thank God for President Kennedy's service and my family's chance to serve him, I will be saying a special prayer of thanksgiving for Sarge.

With a lifetime of love, 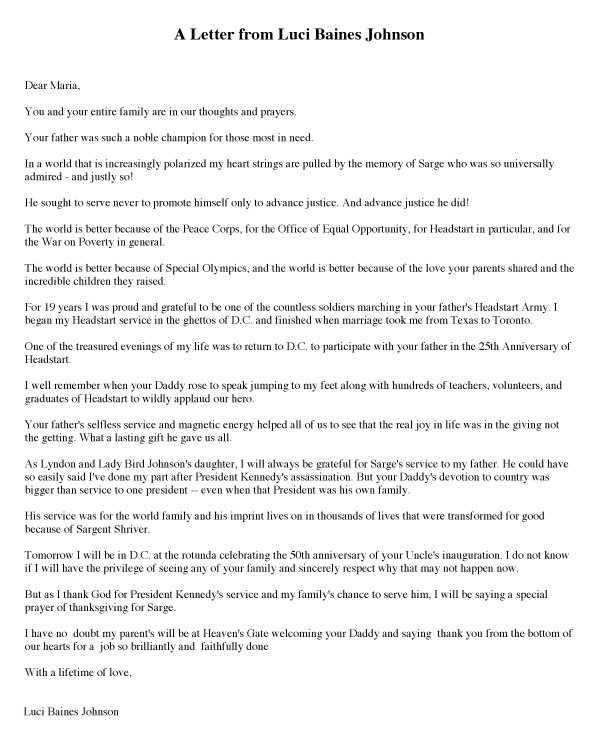